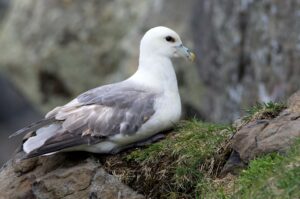 A short video explaining how to recue a fulmar chick

Fulmar chicks leave the nest between the end of August and mid-September. They glide down from the nesting cliffs and often don’t make it to the sea and end up on dry land between their breeding grounds and the sea. After a good breeding summer there can be huge numbers of them in the Mýrdalur area and elsewhere.
Most Fulmar chicks don’t need to be rescued, and ones that have landed in sandy areas, fields and meadows, open water and similar “runways” can usually take off themselves. They lose weight over the course of a few days and spend their time strengthening their wings, and when the wind is right they can take off themselves.
However, ones that land in car parks, roads, forests, high grass and expanses of lupins, ditches and next to fences might need to be rescued.
Caution: Fulmar chicks defend themselves by spitting an oily gastric juice at intruders. They can spit this juice up to two metres and you really don’t want to get it on your clothes as it is hard to get out of them.

IF YOU NEED TO CATCH A FULMAR CHICK e.g. in built-up areas, forests, car parks, expanses of lupin, it’s best to have the right equipment.

CLOTHES: Old clothes which you don’t mind getting dirty (from the Fulmar oil), rubber gloves. High visibility clothes if you are near the road, e.g. yellow hi-vis vests.

EQUIPMENT:
A towel to catch the Fulmar chicks with.
Boxes: 2 – 20 boxes to put the chicks in. Cardboard boxes with a lid are ideal.
Only put one chick in each box. If you put two or more in the same box, there is a risk they will vomit over each other and their feathers will become covered in oil and make them unable to fly.
A car and maybe even a trailer.
WHERE SHOULD I RELEASE THE FULMAR CHICKS: Do NOT release them on sandy beaches where there is heavy surf as the birds will just die in the waves.
They should be released where they are able to glide down to the surface of the sea or in flat areas where they can strengthen their wings.
Slow-flowing and calm rivers and wide river mouths are possible release sites. Fast-flowing rivers are generally not suitable.
Places to release them in the Mýrdalur and Eyjafjöll areas:
Dyrhólaey and Dyrhólaós. The lake next to Höfðabrekka.
Sandy areas to the south of the expanses of lupins.
The lagoon at Holtsós. The river Skógaá.

Fulmar chicks are fed by the parents to the point they become too heavy to fly. Fulmar breeding grounds have extended far inland, further from the sea than is ideal for Fulmar chicks. Fulmar numbers have increased over the last few decades and breeding pairs look for suitable nest sites on cliff faces.

There are a number of reasons why Fulmars choose to breed on cliffs far inland, e.g. all the suitable sites at sea cliffs are occupied, or a bird was raised on a cliff in an inland canyon and returns to the same area when it comes to its turn to breed.

Fulmars can reach 60 years of age and are able to raise a single chick every year.
We would very much appreciate information on suitable sites for releasing Fulmars throughout Iceland.

An article in English about Fulmar chicks in Iceland